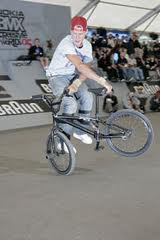 Freestyle BMX is a name for BMX stunt riding. It consists of five disciplines: street, park, vert or ramps, trails or dirt jumping, and flatland.

BMX freestyling can be traced back to the late 1970s, where riders spent a lot of time on their BMX bikes at a concrete skatepark in San Diego, California.

The freestyling movement at this point was very much underground. Although several BMX manufacturer sponsored freestyle teams were touring the US, they were promoting the sport of BMX in general, not specifically freestyle.

The American Freestyle Association (AFA) was the first governing body for BMX freestyle, founded by Bob Morales in 1982.
Bob Osborn founded a slick quarterly magazine devoted solely to freestyle. In the summer of 1984, Freestylin’ Magazine made its debut. The BMX world suddenly noticed the hobby’s massive potential. Manufacturers hurried to the drawing boards to develop new freestyle bikes, components, and accessories, and began searching for talented riders to sponsor. Bike shops began stocking freestyle products. The AFA began to put on organized flatland and quarter-pipe competitions.

During the years from 1981 until 1988, the hobby of BMX freestyling was at its peak. During this time period, the hobby progressed with new bike models being released all the time, as well as new components and accessories designed strictly for BMX freestyle. 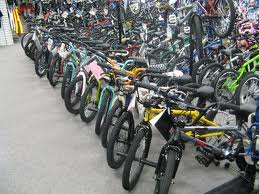 The vast majority of BMX freestyle bikes have 20-inch wheels. Frame sizes and geometry vary, but the top tubes are usually between 20 to 22 inches long. Beginner riders tend to purchase store bought complete bikes and often customize their BMX bike with aftermarket parts, generally as parts break (such as forks, pedals and cranks), to suit their specific needs. However, more experienced riders usually build custom bikes from the ground up to suit their preferences and style of riding, which is much more expensive but allows for greatest customization based on personal preference.

Generally, street riders use slicker tires for more grip on concrete, and may use up to four axle pegs for grinding. Riders generally have a preferred side for grinding and may run 2 pegs only on one side. However, adding an additional 2 pegs to the non-preferred side can open up a great deal of trick variations such as crooked grinds. Street riders also tend to ride big bars for easier tailwhips. Smaller gearing is also preferred among street riders. Street riders tend to run brakeless, for a number of reasons; for example, they claim that barspins are smoother, and that they have more control over the bike.

Park bikes are very similar to street bikes. However, some park riders prefer to use brakes (rear or both) for an increased variety of tricks and more control. Park bikes may differ from street bikes in the fact that they are not as reliant on heavy duty high-strength parts, as park riding is much less stressful on the bike.

Dirt riders usually don’t have pegs unless they want to do peg-specific non-grind tricks such as rocket airs, and they use knobby tires for better grip in the loose dirt. BMX dirt bikes also tend to run only a rear brake and have longer top tubes and wheelbases. Many riders use bigger bars for more control, although big bars have become a trend among kids and popular professional riders. Dirt bikes generally at least have chromoly top and down/seat tubes and forks to increase durability and prevent bending of parts (especially forks) when landing large jumps.

A professional who primarily competes in park contests will probably have a gyro with rear brakes only, zero to 4 pegs, and a lightweight BMX bike. This is because riders in contests usually have a limited time, 60 seconds or less, and have to perform very difficult tricks consistently.

BMX vert bikes are relatively heavy for stability and control, with four pegs.

Flatland riders’ bikes usually run four oversize pegs, and smaller, lighter frames, often with pre-bent tubes to make it easier to do flatland tricks. Flatland BMX bikes most of the time have both front and rear brakes, as many tricks require them to exit a trick or aid in weight distribution. Top tubes on flatland bikes are also shorter (about 17–19 inches). BMX flatland bikes almost always have small sprockets (25 to 30 teeth) and low gearing, to make it easier to pedal out of tricks, as there is no need for them to ride fast.

Before there was a “true” freestyle bicycle, riders used BMX racing frames for jumping and for performing flatland maneuvers.

For some examples of different tricks, check out the BMX tricks page.