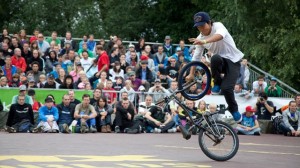 BMX Flatland occupies a position somewhat removed from the rest of BMX freestyle.People who ride in the other disciplines will generally take part in at least one of the others, but flatlanders tend to only ride flatland. They are often very dedicated and will spend several hours a day perfecting their technique.

BMX flatland also differs from the others in that the terrain used is nothing but a smooth, flat surface (e.g. an asphalt parking lot, basketball courts, etc.). Tricks are performed by spinning and balancing in a variety of body and bicycle positions. Riders almost always use knurled aluminum pegs to stand on to manipulate the bike into even stranger positions.

Flatland bikes typically have a shorter wheelbase than other BMX freestyle bikes. Flatland bikes differ from dirt jumping bikes and freestyle bikes in one way. The frames are often more heavily reinforced because the people riding flatland often stand on the frames. This shorter wheelbase requires less effort to make the bike spin or to position the bike on one wheel. One of the primary reasons flatlanders often ride only flatland is the decreased stability of a shorter bike on ramps, dirt and street.

A variety of options are commonly found on flatland bikes. The most unifying feature of flatland bikes is the use of four pegs, one on the end of each wheel axle. Flatland riders will choose to run either a front brake, a rear brake, both brakes, or no brakes at all, depending on stylistic preference.