That’s right, Camp Woodward is doing a skatepark tour. Check out this link for more info and to see if they are coming to a skatepark near you.

Skateboarding, BMX Freestyle in the Olympics?

Skateboarding and BMX freestyle have a shot at becoming Olympic sports at the 2016 Summer Games, thanks in part to added push from sports power players who want to attract younger viewers and action sports fans.

Cycling’s world governing body, the Switzerland-based Union Cycliste Internationale, and others are lobbying for the sports to be added to the 2016 Games in Rio De Janeiro. Discussions are under way “to have BMX freestyle as well as skateboarding in the Olympic program,” said Enrico Carpani, a spokesman for UCI.

UCI attempted to include skateboarding in London’s 2012 Olympics, but it fell through in 2007.

To see the full story go to: http://rsshog.com/a/skateboarding-bmx-freestyle-considered-for-2016-olympics-in-rio-de-janeiro-qrmAKP.htm

Looking Ahead: BMX in the New Year 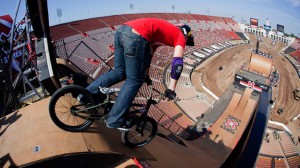 Morgan Wade is one of the few riders on the planet that competes in Big Air right now. If contests focused more on the gap and less on the quarterpipe, the range
of riders that would man up and roll-in for a 70-foot trick would increase enormously.

On New Year’s Day, we presented a sarcastic look ahead at what to expect from BMX in 2011. The post got some good attention, and generated some laughs, but it also forced me to think about the next 362 coming days, and what the all-encompassing world of BMX might see in the coming months. So I made a list of what I thought might be on the horizon, and that list follows.

A (Much Needed) Evolution of the Mega Ramp
In 2011, BMX could really benefit from a different approach to Mega Ramp contests. I look at it this way: riders want to jump the gap on the Mega Ramp, but don’t really care about airing the huge quarterpipe after the gap. If we ditched the quarterpipe, and focused more on the gap, the range of riders wanting to ride the big ramps will increase dramatically, and as a result, the contests will become more exciting, more competitive and crazier to watch. Don’t get me wrong, I love watching K. Rob blast a 20-foot air on the quarter, but there’s maybe ten riders in our entire sport that can confidently air that high on the quarter, while there are up to 50 riders that would gladly throw a trick down over the 70-foot gap.

“Pro Town: Greenville,” the new 44-minute documentary from producer Mark Losey, is set to premiere in Greenville, N.C. on the weekend of January 7-8, 2011. The worldwide premiere is showing at Tie Breakers, located at 1920 Smythewyck Drive in Greenville.

The film, a documentary featuring interviews with BMX pros in the Greenville, N.C. area, depicts how the town grew into a BMX mecca for pros throughout the world. The 44-minute movie includes current and archival footage and photographs, plus interviews with Dave Mirra, Ryan Nyquist, Colin Mackay, Ryan Guettler, Rob Darden, Allan Cooke, Josh Harrington, and many more. To date, Greenville’s BMX accolades include 34 professional locals, 21 X Games Gold Medals and countless other contest wins.

To see the full story go to: http://espn.go.com/action/bmx/blog/_/post/5923819/greenville-premiere-jan

TV Presenter and Pro BMX star TJ Lavin is making great strides in his recovery since a horrendous crash in October. The rider is spending much of his time at home and is still in considerable pain, but the signs are promising.

Tim “Fuzzy” Hall, close friend of Lavin’s and Pro dirt BMXer said: “He’s kicking butt. When I talk to him, he’s all there: memory and everything. He’s the same old TJ.”

To read the whole story go to: http://www.celebrities-with-diseases.com/celebrities/tj-lavin-making-a-great-recovery-11539.html

MIAMI, Dec. 16, 2010 /PRNewswire/ — Red Bull Bargespin was a five-day journey on a floating BMX park with seven of the top ranked BMX riders. Starting in Fort Lauderdale on December 11th at the Winterfest Boat Parade the barge quickly became the crowd favorite and won two awards – Best in Entertainment (Barge) and the Kaye Person Award for spirit of innovation. Following the show stopping kick-off, the team of riders made their way down the Intercoastal

Waterway to Miami for the final stop along the American Airlines Arena on December 15th.

To see the rest of the story go to: